what worked for us: walt disney world with anxiety/ sensory issues


We returned a few days ago from Remy's epic tenth birthday adventure (three theme park days at Walt Disney World, one at Universal Studios) with lots and lots of memories of a very fun trip.

And one very sad late-night meltdown.

As Remy himself said the next day, 99.9% of our trip was fantastic! And the one meltdown was unexpected and blew over after a good night's sleep.

(Honestly, a lot of birthdays end in tears. It's just a thing. There's songs about it, for goodness sake!)

Remy's biggest current phobia is of the dark. Uh-oh! A lot of rides at theme parks - especially Disney World - are "dark rides" in enclosed spaces with (dimly) glowing neon. Even these "non thrill rides" are dark enough that Rem needed his own light source, to feel more in control of the experience.

Enter amazon: I bought this six pack (not an affiliate link) of glowing LED wristbands. They are marketed towards runners and dog walkers and they're fantastic. Since they are battery powered, they can be turned on and off and reused, last much longer than glow sticks, and are much brighter.


(Remy also used a mini red LED lightsaber that we got at Target during our camping trip last month.)

Having our own lights helped him with his fear of the dark, even on rides most people (without anxiety) wouldn't think of as scary, like The Seas with Nemo & Friends.

The lights definitely helped even more in the higher thrill level, scary, pitch black dark rides, like Space Mountain, which we all loved so much we rode twice! And probably would have done more, except they ran out of fast passes* and no one wanted to wait in line at the end of the day, so we did the People Mover a second time instead.


Space Mountain is So. Much. Fun. but the People Mover at sunset was stunningly gorgeous! I regretted not having my actual camera with me.

Ten is a much different age than eight. At eight- when we went to Disneyland - Rem had a lot of problems with anxiety on the dark rides. Other than Star Tours, which he loves insatiably, dark rides were too much.

But I also didn't have the glowing wristbands back then (I learn from my mistakes).

(The hearing protectors I accidentally left at home might also have helped back then, but at ten they were thankfully* unneccesary.)


In terms of Remy's anxiety of the unexpected (which has greatly lessened in the past few years, but is still a Thing), I depended on planning and preparation, just like when we went to Disneyland. Except slightly more intensive, because Walt Disney World (and Universal Studios) is so much bigger and much, much more crowded and requires a lot more planning (including getting fast passes in advance).

We made a plan: one park per day - except at Universal, where the Wizarding World is spread between two parks, so we did both. We each got to pick a park we especially wanted to visit and Remy got to decide which park he wanted to do on his actual birthday (Hollywood Studios, of course, because Star Tours).

I made fast passes based on what everyone told me they wanted to do most of all, in each park. 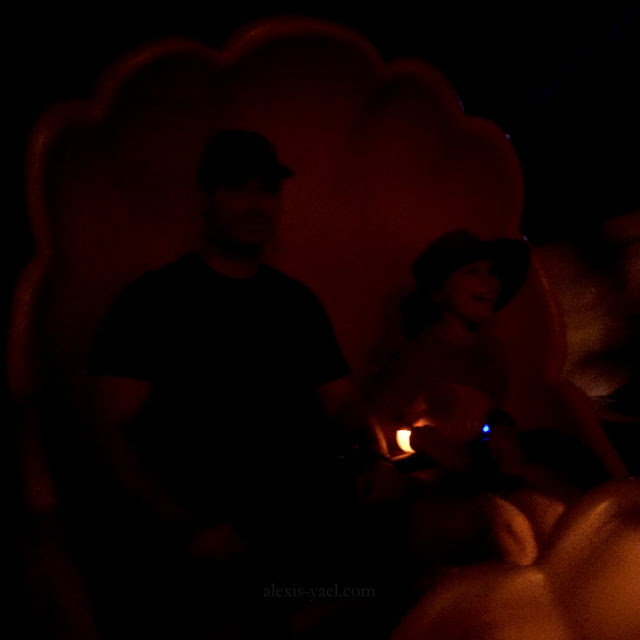 I also prepared Remy in advance that we were not going to be able to go on Star Tours as many times as we had at Disneyland (we ended up going three times). He went through the guide book ahead of time so he knew what to expect on each new ride (as well as knowing which rides he definitely did not want to do!).

We watched some ride throughs this time around (which we did before Disneyland as well) but not as many as I thought we would.

M and I did go on one ride without him - the Rock 'n' Roller Coaster, which is a very thrilling ride, indeed! We did the child swap, which worked out great.

Remy was not the only kid who was tall enough not riding (and there were adults, too, waiting in the gift shop for their friends): going upside down, even briefly, isn't for everyone!

But who knows about next time! (Um... when Star Wars land opens?) We'll see. Thirteen or fourteen will be very different than ten, I'm sure.


I hope this post helped you, if you found it by searching for tips on going to theme parks if you (or your kid) have sensory issues or anxiety.

I already wrote a little about this on my personal Facebook, so if you're a relative or friend, I hope you enjoyed getting more details and photos. There will be more to come! I have so many photos and want to find the right way to share them!


Plus, I learned so much while I was getting ready for this trip that I want to share. Especially on the sensory issues - which hardly anyone writes about - and doing Disney World as a quasi minimalist, which we definitely were, by Disney tourist standards. (Except for the first day, I did not take a bad to any of the theme parks. And I could have not taken it the first day, I was just over-prepared with things I'd read we'd need. We didn't.)

I also have a very lengthy list post already written (by hand) on things I wished we'd done differently (and things we did just right). I'm not sure that one will see the light of day, because transcribing my handwriting can be a pain in the behind, but we'll see.

If you have any specific questions/ areas for me to address, let me know (on FB or Insta or by email).

We have an amazing time doing adventures our way.
I encourage you to do adventures your way.
\You aren't me, I'm not you./
Adventure is out there!
(And in here.)
Have fun.

* His classroom is so noisy this year, he's been getting a lot of practice dealing with loud ambient sounds so his anxiety about it is way lessened. However, it's much easier when the noise is expected (at school or during a ride, which he knows will be noisy). The one overwhelm he had was when a store had unexpected loud noises and darkness (mimicking a thunderstorm). It was just too much all together, which makes sense.