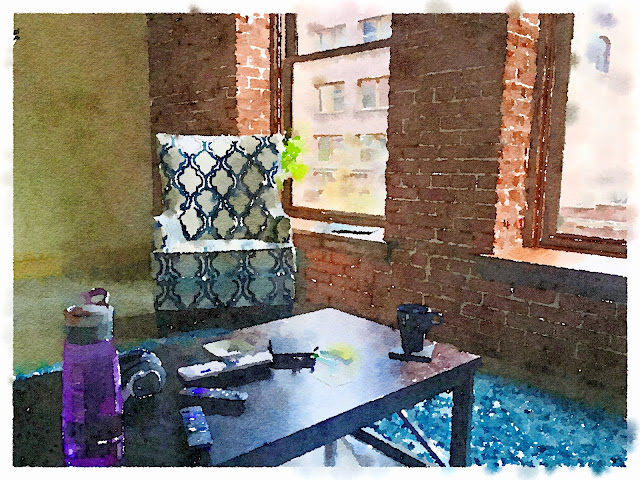 we started this year long journey of ours with what fit in our (new to us) station wagon.

(we had to go back to our storage unit one last time to drop off a few things because it turns out I didn't want to go through the year with a guitar on my lap.)

making it all fit into the station wagon was difficult at first, but it got easier each time we moved.

as I wrote before (only one week in, wow. time flies), I sort of figured we would consolidate along the way but I didn't realize how quickly it would happen.

in Boston (the second time we were in the northern suburbs), I was able to reduce our toiletries to two smaller tote bags (which are easier to carry and pack in the car than the hard plastic tote they were previously in). this was made possible by using up a bunch of very large but almost empty bottles of body wash and shampoo and replacing them with smaller bottles. (and going back to using the same body wash instead of each having our own.)

in New Hampshire, we stopped needing to put two seats down in the back of the car after we forgot to pack the laundry basket we had with us. it had been useful, but we didn't actually need it.

and then somewhere between Toronto and Saint Louis, we traded our very large cooler for a smaller, more insulated cooler that is much easier to wheel around. that didn't save us quite as much space as I thought it would, but the improvement in upgrading to a nicer cooler is noticeable.

still, we comtinue to have an annoyingly large (and heavy to carry) plastic bin for our kitchen stuff. most of which is redundant because all of the Airbnbs we have stayed at have basic kitchen utensils. after I declutter what we aren't using, perhaps it would be better to put what remains in a backpack. or a wheeled suitcase. or a wheeled storage bin. I'll figure it out. meanwhile, we'll make do. because that is what we do.

that's what we do.