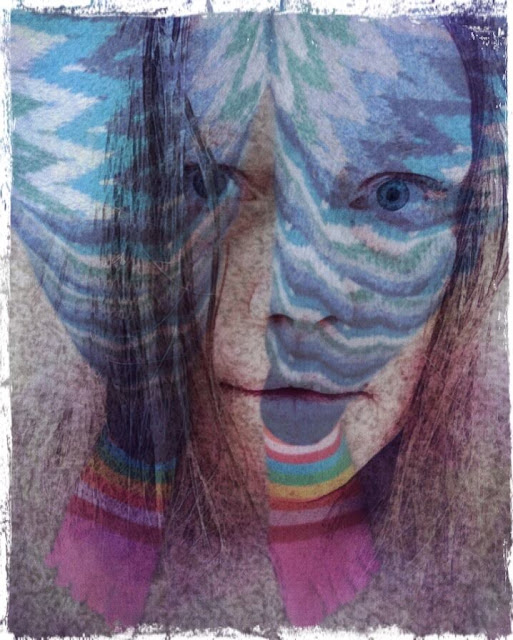 may what is hidden be revealed
the lies within terror, the hate
within hearts, the long game of love

in this place may we seek the reveal,
no bullshit between us, no more
hiding behind simple rhetoric

'us vs them' the biggest lie of all
that there is an 'us,' that there could
ever be a 'them;' hidden in plain sight

that I am you (and you and you)
because without interconnectedness
nothing exists: no hiding from truth

* the personal is political.

* yes, those are swants the fifth in the double exposure above.

this pair of swants is unique in that I shopped for the sweater that is their base on etsy instead of finding them in a thrift store. (I did go to Goodwill to source a sweater, but couldn't find one.) thus, I had my choice of patterns. kind of neat. also kind of nerve-wracking. (would they fit right? they did!)

I love the colors and zigzag pattern. the wool is a little bit itchier than I like, but I do wear leggings under my swants (bc I have sensitive skin for even non-itchy wool), so it doesn't really matter.

the photo of my legs is from the day I wore these swants out for the first time (even though they weren't quite finished, they were finished enough). and although that was well over a week (and like, four states) ago, I've been wearing them almost nonstop since, so I only started finishing them up yesterday, darning the sides of the hips (that I had joined with long wool yarn) and the seam where the legs meet the waist, plus darning a few preexisting holes (that made the sweater cheaper to purchase).

I did end up using the internet-available pattern here, but not until after I'd cut them using (the memory of) the Westknits pattern (no longer available from him, but shown here).

that's why I have gaps in the sides that had to be darned up and seams that need to be a little extra wide that also need (essentially) some darning.

and also luckily, my ability to fix wonky swants issues is pretty good, too.

I was so annoyed at myself after I realized I had cut them "wrong" (for the technique I was actually going to use). I let them sit a few days until I could reconfigure it in my mind and it ended up working out a lot better than I had imagined.

that feels like an apt metaphor for my life, and probably is. sigh.

(I also ended up buying WAY more yarn for the darning/ crocheting I thought I was going to have to add to make up for the cut away parts of the sweater. so now I have a bunch of wool yarn to knit hats to give away with. yay!)
Labels: darning double exposure life on the road nonce form novembermoodringpoems poeming self portrait surrealsoulscapes swants swants season wabi sabi winter is coming wool