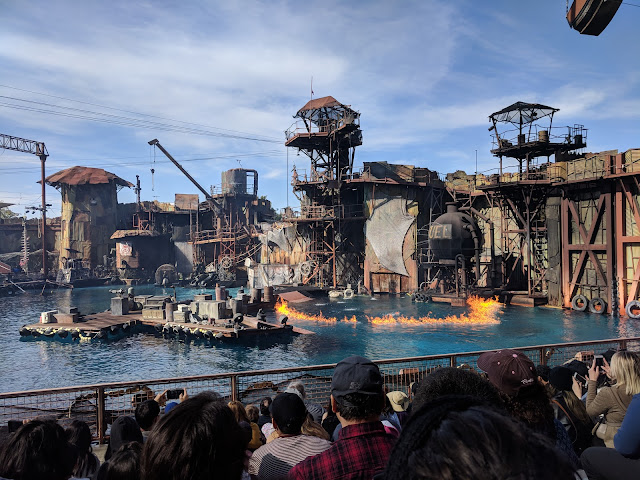 we saw the waterworld show for the first time!

right now, we're in Southern California for a month (because there are many, many influential psychologists down here for M to interview).

and while M works, R and I are binging on theme parks.

this was my plan for this leg of our trip, because Disneyland is my happy place. and Universal comes a close second. I didn't realize when I made this plan how much I would need to be at my happy places, but we're here and I do and so it is mostly good.

the first week we were down here, we were located halfway between Santa Barbara and Hollywood, so I bought R and I memberships to Universal, thinking we'd go at least four times. 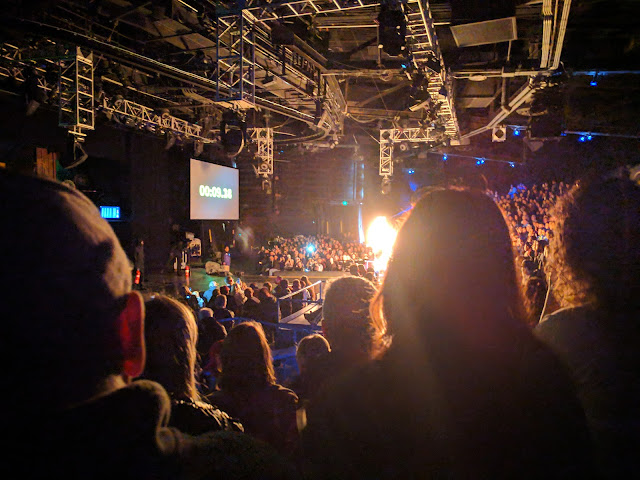 another first: the stunt show at Universal!

(spoiler alert: we went three times that first week and have been twice since then for a total of five times now and there's a week left of being here - we may go again, we may not. we've got a lot of Disney days left, but Universal is slowly becoming our favorite, so we keep going back.)

after that first week, we moved south, to roughly midpoint between the four universities M is interviewing folks at. Disney was having a very good sale on tickets, so I splurged and bought almost too many days of tickets. lol. never thought I would say that! 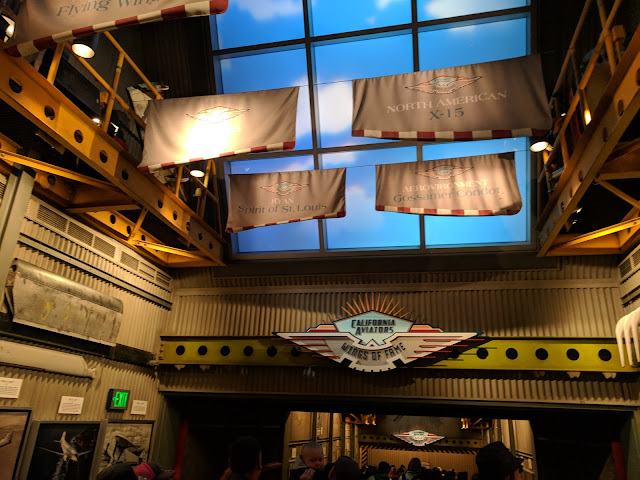 another first, at California Adventure: Soarin' Around the World

(the thing about Disneyland/ California Adventure is it's a lot of walking... ok, less than at Disney World's parks, but still. on average, we walk almost twice as much at Disney as we do at Universal. so we get tired and going two days in a row doesn't really work for either of us. we've planned out our remaining days and it's just enough. and Space Mountain reopens on Thursday!)

after this leg, we're going to split up: M is going down to the San Diego area and R and I are going back up to visit my mom for a week.

(we didn't get to see her at all after we got back from Australia/ NZ because of potential illnesses. that was hard.) 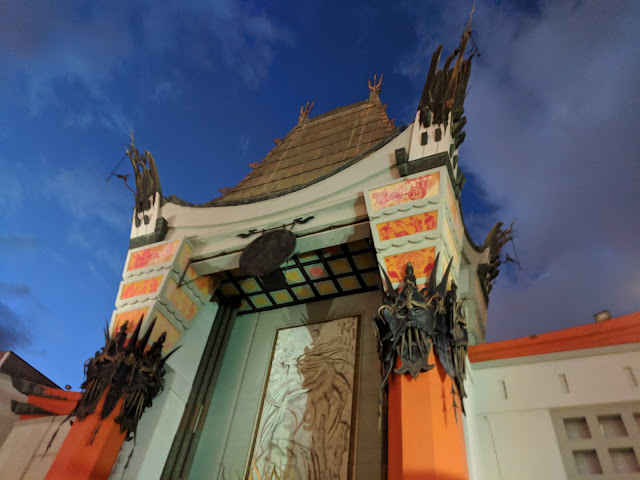 in non-theme park firsts, we saw Captain Marvel at the TCL Chinese Theater! the IMAX there is huge.

it's been rather chilly and grey in Southern California, which is unusual. I know spring is here (there's lots of flowers in bloom and trees are releafing everywhere) but it hardly feels like it. I don't think Northern CA will be much warmer.

(and then when we go to the UK in April, we'll be going back into early spring again, with a high likelihood of chilly grey weather. ugh.)

and I'm just, ugh. not quite spiraling, but it hasn't been all theme parks and roses. though it might seem that way from my instagram, I'm mostly burrowing/ hiding/ hibernating.

(though not sleeping great. fucking hormones.) 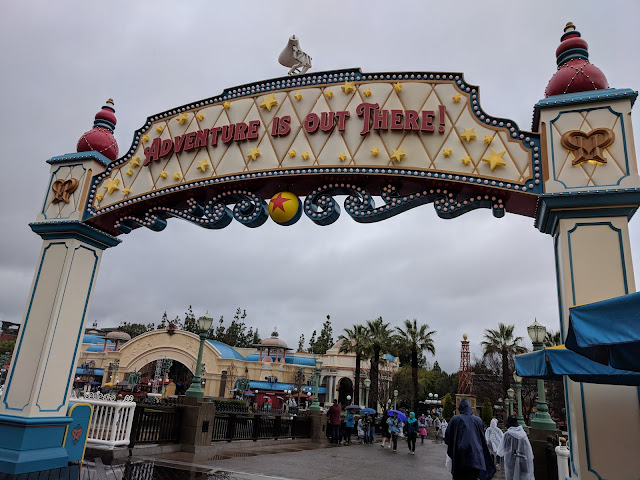 another first: Pixar Pier (we didn't ride anything here, mostly because of the rain).

I just don't wanna deal with anything other than what's immediately before me. and so I haven't.

this probably  isn't the greatest life choice, but it's what's happening right now.

(as an example, I started this blog post two weeks ago and just today got around to opening my laptop back up to continue it. also, I haven't used my real camera since we got here. sigh.)

still, I manage to keep going on the things that have to be done. airplane tickets. making reservations. this is my job this year, being the one to keep us going and organized. that's my biggest priority. 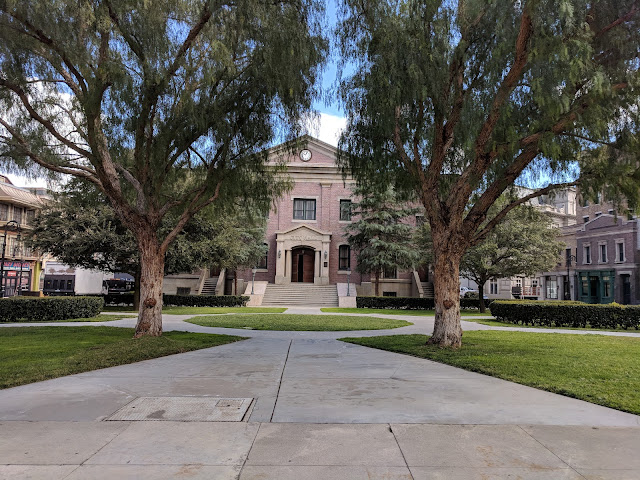 it's not often we get first on the Studio Tour at Universal (we've done it over eight times), but here's one: seeing the Courthouse where they filmed Back to the Future (the facade is different)!

this is life: I'm deep in "the and space" as my friend Liz Lamoreux calls it, right now. the beauty and the shit. the love and the pain. theme parks and grief.

my old friends, ebb and flow.

I'm alive. I'm managing. but I'm deep in the ebb right now and it's taking a lot to keep afloat.

but I am still floating. 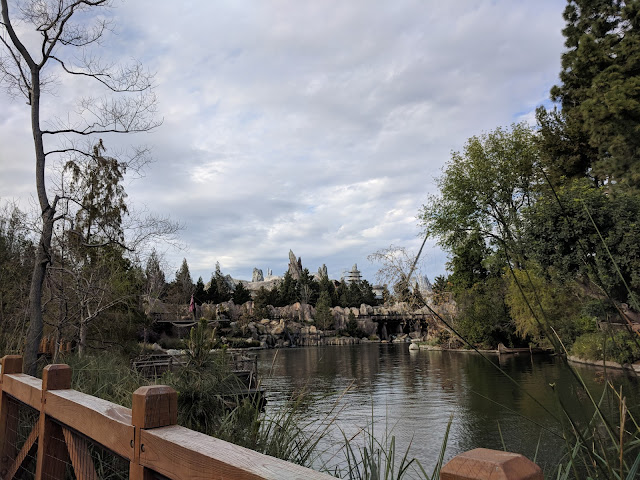 I write these words as an archive, because writing helps. reading my past writing helps. I hope they help you, as well, but I am really writing for my future self, to remember.

today I needed these words, that I wrote back in 2014.

thank you, past me.

(thank you, thank you, thank you future me.)
Labels: #nomadicsabbatical acceptance of what is adventure California disneyland ebb and flow firsts from my archive grief love pain practicing what is hard spring is coming Universal Studios Hollywood