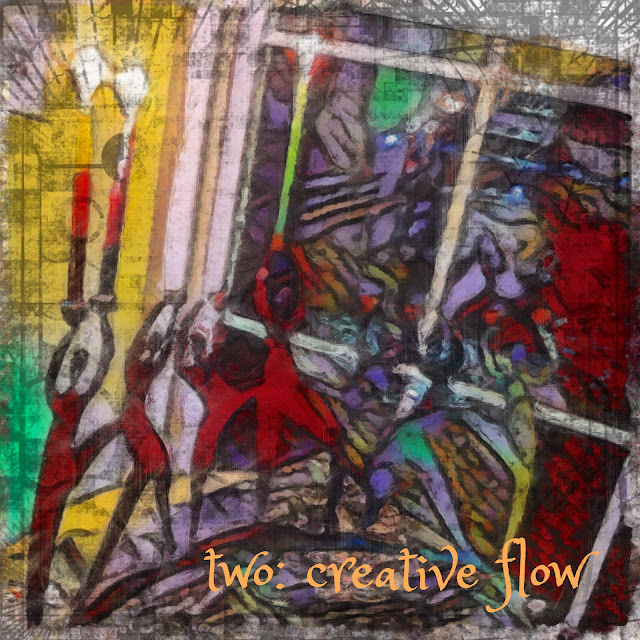 creativity is a huge part of being human.

we are born curious. we learn by absorbing information and playing, creating meaning and structure and art and beauty and mess or order in our responses to the world as it unfolds to us.

this is a lifelong process. creativity isn't only for kids or teenagers or adults. creativity may look different in every stage (and to each individual) but every one of us is creative, in our essential, human nature.

I identify strongly as creative. born into an artistic family, having individuated in my own artistry as a teenager and now adult. I've practiced so many different art forms it's almost ridiculous (but it isn't, at all, unless it is, because humor is also a form of creativity), and I'll practice more art forms as long as I continue living.

right now, I am in creative flow, writing.

(and digital arting, when I made the image above of our hannukiah, lit on the second night, last night.)

earlier today, I was playing DnD with R and M and that was a different kind of creative flow. one I don't feel very good at yet (so many choices! too many! argh!) but creativity isn't about being good at something or bad at it, it's about the DOING.

right now, I'm in creative flow, but I know, as a person who has been conciously creative for as long time, that later I'll be in creative ebb. it'll feel harder to write. harder to art. harder to play.

there is ebb and there is flow.

and there is constancy, underneath the ebb and flow.

I don't stop making art just because something doesn't work out the first time.

I keep going. I trust the process. I trust that ebb and flow happen and that practice is the way I maintain creativity as a constant of my life.

I pay attention to the process and I don't put too much pressure on myself to produce masterpiece after masterpiece. I recognize that I may prefer certain pieces and that it's possible other people's opinions will differ and that's cool.

(this is how I interpret the way JJ Abrams responded to both the criticism and acclaim of The Rise of Skywalker. which, FYI, I loved very, very, very much. it wasn't exactly the way I'd hoped the balancing of the force would ultimately go, but it was extremely emotionally satisfying and that's the Star Wars film I really needed. your mileage may vary.)

creativity is part of being human.

be human.
Labels: #theafteryear being an artist being human creativity ebb and flow hanukkah practicing what is hard self care star wars what we love