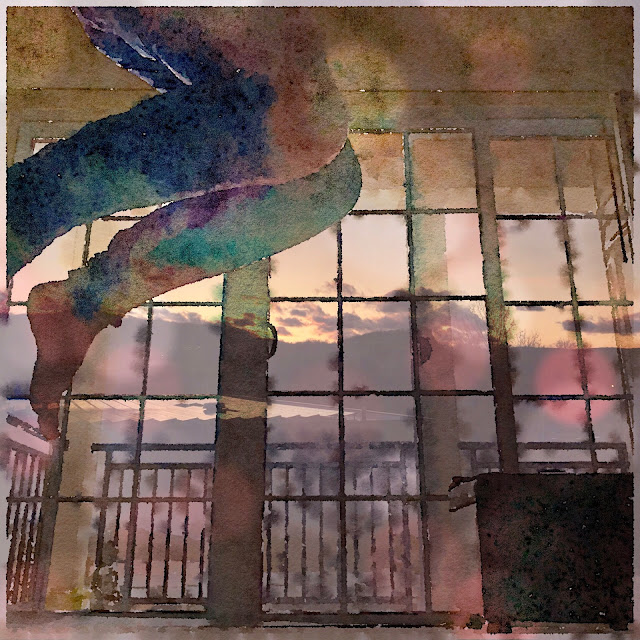 
four being my lucky number, I've always resonated with the idea of having a day that occurs once every four years.

that that day is in February (which is historically a month of difficult anniversaries for me) makes it more resonate, not less. because it elongates the month in an unusual way, but doesn't add in to the anniversaries in a particularly painful way.

(none of my February traumas occurred on leap year days.)

and I have fun playing with the look of (shaped) poetry.

I made the image first, of course, somewhat inspired by my previous leap year posts.

(in 2012, I had this really cool photo series that I'd shot earlier of (mostly R's) feet at the beach in California earlier that month. in 2014, I took a photo-walk on leap day and used a static photo of my feet with a found heart and poemed because of course.)

I knew what kind of image I wanted today: my legs and feet, leaping.

the serendipity is that the final image turned out even cooler than the one I had been imagining.

(my leap was much higher than I expected it to be! having only one foot in the frame gives it an unexpected dynamic! the colors of my unicorn leggings didn't get as lost in the silhouette as I thought they would!)

making art is so fun.


I haven't taken a photo of myself jumping in a very long time.

usually in jumping photos, it takes a bunch of outakes to get the timing just right.

this photo was literally the first one I took today.


I set the ten second timer on my iPad pro (I used my iPad because it has burst mode, which is useful for action shots) and started getting ready to jump as the flashing light counted down. then my iPad tipped backwards (it was propped upright by the cover) and I had to right it. I jumped right after I set it upright. the light had gone out, so I thought maybe my jump had been mistimed. and I wasn't sure if the angle was right. and I ended up jumping much closer to the lens than I'd planned.

(all of which is ok, I'd try again. it takes awhile to get photos right, sometimes.)

still, I looked at the photos anyway, because you never know when serendipity will happen!

and it happened here: somehow in the midst of all the things that had gone differently than expected, the third photo in the burst of ten was exactly the leaping photo I'd wanted!


I took the gift photo and used three different apps to create the art I wanted, playing around.

then I poemed. which ended up being a gift, too. not much needed in the editing except for the shaping of the lines.


warmer weather is coming in a few days.